Portuguese tile murals can be expanded, reduced or customized for your space.

Tile Mural Art (formerly known as PortoDeMos) is proud to present our collection of hand-painted, Portuguese tiles and tile murals imported from the town of Porto de Mos in Portugal. These individually signed works of art make wonderful additions to any home or business and can be used as kitchen backsplashes, decorative tables, borders, or atmospheric wall art. Our tile murals become the focal point of any area!

Portuguese tile art features decorative, hand-painted tiles put together in such a way as to create beautiful and unique tile murals. Porto de Mos artisans specialize in old world tile mural art that reflects traditional florals, religious themes, landscapes, seascapes, renaissance/medieval themes, and country living. For your convenience, our catalog is divided up into these categories.

What is the History Behind Portuguese Tile Art?

The Art of Azulejos is another name for Tile Art.

Although azulejos are not a Portuguese invention, they have been used more imaginatively and prominently in Portugal than in any other country. The Egyptians were the first to use glazed tiles. In the 13th century the Moors brought this tile art, consisting of glazed tiles organized into geometric shapes, to Spain, where they adorned the walls of buildings. In the 15th century, during a visit to Spain, King Manuel I of Portugal fell in love with the shiny tile art adorning the walls there and introduced this tile mural art form to Portugal. 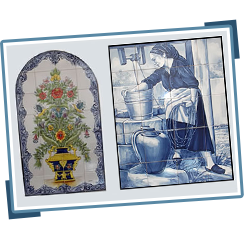 In the 16th century, adorning bare walls with these tiles became very popular in Portugal. They initially imported these tiles to meet their great demand. However, as the people of Portugal embraced this trade, Portuguese tile masters began to surface. They refined this art of tile mural making and expanded it beyond mere geometric shapes to include depictions of humans and animals. Renaissance paintings became a springboard from which they would draw their inspiration, using blue, yellow, green and white as their primary colors. These artists were recognized for their exceptional work and they signed their names to their unique tile mural creations.

In the 17th century, influenced by the Ming Dynasty porcelain from China, the azulejo took on the iconic blue and white as we know it today. Rafael Bordalo Pinheiro, Júlio César da Silva and Maria Keil, and Jorge Colaço are some of the notable people associated with this tile art form. The National Tile Museum (Museu Nacional do Azulejo) in Lisbon, Portugal is a museum dedicated to preserving tile art from around the country. It houses the largest collection of Portuguese tiles in the world and its works span five centuries. Portugal is still the country most noted for this form of tile art. In fact, the iconic blue and white azulejo tile is still very much a part of the country's architecture and an intrinsic symbol of Portuguese culture recognized all over the world.